What's In This Issue

The Elmer's Glue Crew is once again sponsoring a program in which schoolchildren across the United States collect empty glue bottles and glue sticks for recycling. In 2008-09, more than a million kids participated, and the company is hoping to double that number this school year.

In order to participate, students collect Elmer's Washable School Glue and Glue-All bottles that are marked with a #1 or #2 recycling symbol. After cleaning the containers with warm water, the bottles are to be placed in a collection box and a special label is attached to it. Then the box can be dropped off at your nearest Walmart Department Store.

Please note that Elmer's Glue Sticks are not marked with a recycling symbol, because they're made with plastic that requires special handling. For that reason, they're accepted only at certain facilities. Before turning them in, clean the containers with warm water.

In addition to helping save natural resources and landfill space, collecting and cleaning the bottles and glue stick containers can earn prizes for students. For more detailed information about the Elmer's Glue Crew program and to access a recycling-related curriculum, visit http://www.elmersgluecrew.com/.

Trashasaurus Rex Inspires Others to Create

Trashasaurus Rex celebrated his 17th birthday in October! Completed in the fall of 1992, we created the solid waste sculpture to protest a United States District Court ruling. The judge in the case decided that the State of Indiana couldn't keep other states from exporting their trash for disposal in our landfills. Trashasaurus was created to bring attention to the news story, and to encourage our citizens to reduce, reuse, and recycle.

Since his creation, the dino appeared in a parade, and he participated in the First Kids' World Conference on the Environment, which was held at the Nickelodeon Television Studios in Orlando, Florida. After learning that the Rocky Mount Children's Museum lost its entire collection from flooding caused by Hurricane Floyd, we donated Trashasaurus to the North Carolina museum .

Directions for creating one's own solid waste sculpture appear at The Imagination Factory, and since posting them in 1996, many students, families, and organizations, including Tim Freud's class at Holy Cross Elementary School in Dover, Delaware, have created their own versions of Trashasaurus Rex. Below are images of some of the solid waste sculptures. If you know of others, please send photos and contact information to kidatart@kid-at-art.com

The link above will allow access to dozens of Imagination Factory art activities and articles that appear in all newsletters.

Dedicated to encouraging people to recycle and to buy recycled products, America Recycles Day (ARD) is celebrated each year on November 15. Now on ARD, millions of Americans attend school and community events to celebrate.

Study the materials used to create the America Recycles Day flag, and collect similar solid waste. Spray paint red and white stripes and a blue field on a sturdy background, such as a piece of plywood. Now arrange the objects you've collected on newspaper, and paint them red, white, or blue. Use a hot glue gun to attach them to areas of the same color. Fill in the red and white, and add fifty pieces of white solid waste for the stars. 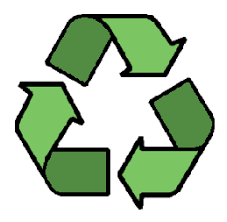 To complete the recycling circle, you must collect, recycle, and buy recycled, so visit our artists' professional showcase, The Green Gallery. There you can see and buy a variety of art and fine crafts created from scrap, or work made by reusing materials. As an Imagination Factory Member, you'll receive a 20% discount, too!